I manage my machines at home (and at work) with Puppet, a configuration management tool. Sometimes one of my manifests needs to change a systemd service’s configuration – for example, if the upstream package didn’t ship with a unit file, or to override some settings in a .service.d directory. systemctl daemon-reload needs to be executed after changing configuration in the /etc/systemd directory, but Puppet doesn’t have built-in support for this.

Our initial solution at work was to create a systemd::daemon_reload class. It contains a single exec resource that runs systemctl daemon-reload when the class receives a refresh notification:

We then set up notification relationships from:

For example, we’d do something like the following to create a custom unit file for fcgiwrap:

This creates the following dependency graph, with dashed lines representing a notification dependency: 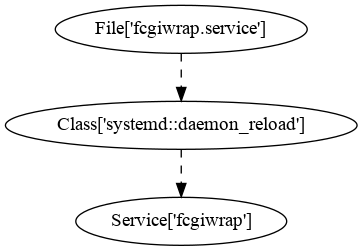 However, it doesn’t work so well if you introduce more than one service. Here’s what the dependency graph looks like if we add a custom unit file for stunnel in the same way:

If any unit file is edited the notification dependencies cause every service to be restarted. This isn’t ideal if you have lots of services in a production environment where you want to minimize downtime caused by configuration changes.

I recently came up with a better solution to this problem by using a mixture of normal order-only dependencies and notification dependencies:

The changes to the code are minimal: 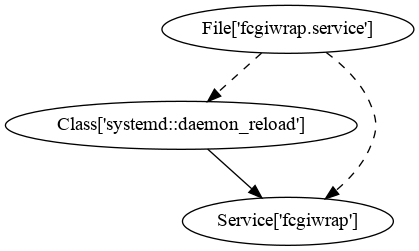 In the case of a single service there’s no real difference from the original solution. However, here’s what the dependency graph looks like when we add an additional custom unit file for stunnel:

Because the notification dependencies on systemd::daemon_reload have been replaced with order-only dependencies, only the corresponding service is restarted when a single unit file is changed.